Great News! Only 2.59% of EMS Providers are Below Average!

What makes and excellent EMS provider? I’m not sure to be totally honest.

I decided to try and start from the opposite end and see if I could understand what makes a terrible EMS provider and go from there.

Is it a lack of commitment by the providers? A lack of ideals? Accepting mediocrity? low intelligence? a lack of empathy? Perhaps they are ignorant and think they are a quality healthcare provider when in fact they are not?

Is there really a lack of awareness about our actual abilities and knowledge base? I decided to find out.

I did an informal survey using survey monkey and posted it to social media asking EMS providers to rate their skills and knowledge in one of 5 categories ranging from well below average to well above average. There are numerous limitations to the data, it was self-reported and on social media so there is possibly a huge amount of bias in the population and the replies and I would say use this for entertainment use only, but somehow I suspect a well done study would reveal very similar numbers. I stopped the survey at 309 responses. It was interesting to note that even at 30 responses the percentages were roughly the same.

2.59% of people who responded felt that their EMS skills and knowledge where slightly to well below average. Out of the 308 respondents a total of 8 people felt they were below average. Yes, 8.

In 308 respondents the truth is 154 of them should be below average if we assumed there was a normal distribution of competency in EMS. Is it possible that only the best and brightest in EMS happened to look at a few EMS social media pages and decided to fill out my survey? I guess it is technically possible.

The second question on the two question survey asked about their EMS service. Again respondents had a choice of five options ranging from well above average to well below average. I posed the question, “In terms of performance and patient outcomes, I would say the service I work or volunteer at is:” 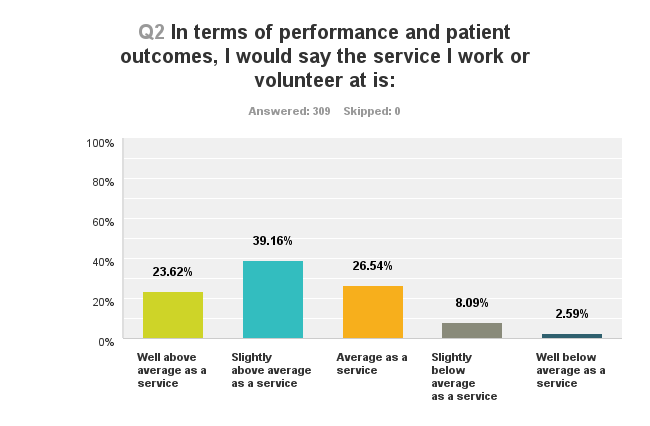 This should be great news for patient as only 10% of EMS services are worse than average in terms of performance and patient outcomes.

How are people so bad at self insight and evaluation? Is it simply human nature? Call it what you will, there are a number of terms for this behavior:

View all posts by Brian Behn