You were wrong. Things are not going well. No one is going to be able to fix this. You thought that by getting to the ER things would get better.

The patient is desaturating again. Alarms are sounding. You can sense the rising panic in the room. People are staring wide eyed at each other in disbelief of the events unfolding. Surely at any moment someone is going to speak up, someone is going to tell the doctor we need to stop; except no one is going to. 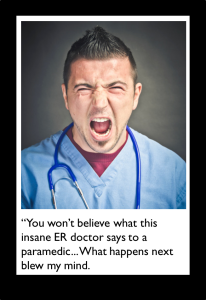 People are beginning to hedge their bets now, slowly grabbing an epi out of the crash cart, slowly moving the cric kit closer to the doctor, getting in position to start CPR. He is still trying to intubate the patient.

You are hoping that perhaps the flight crew standing in the corner will speak up. They don’t and no one else is either.

It is going to have to be you, so you make a half assed attempt at crew resource management, not enough to get results, not enough to turn things around,  just enough to appease any guilt about yourself you might have later.
You are on a runaway train telling the conductor how many feet of track are left.
“O2 sats are at 50%…” He ignores you

You are in a crippled submarine, sinking towards a watery grave at bottom of the ocean, reading off bathymetric depths as you wait for the walls to implode.

He is still in the airway. Any second now the patient is going to arrest. How has he not already arrested? How is this happening? Jesus, why is no one speaking up? No one in the room is willing to make eye contact at this point.

You are in a crashing airplane. The cockpit is filling with smoke, burning your eyes as you read the numbers off the altimeter. The ground is rushing up at you. Soon this will all be over.

At 2 seconds to midnight on the doomsday clock he pushed the tube as hard as he can and it goes in. not that the patient was ever going to talk again anyway but I imagine the amount of force required to get the tube in sealed the deal on that.

Slowly over what seems like an eternity the O2 sats creep back up towards normal. I feel like I was a witness to a public execution.

“Jesus, what an asshole.” I say to my partner about the doctor as we drive back to the station.
“Add him to the list of doctors I never want to touch me.”

Do you have a list of doctors you never want to touch you?

In the spirit of transparency my reports are supposed to be “QA’ed” by the training officer. I can tell you how our service embraces just culture; I can list of all kinds of terms to make you think I am well versed in it, I can give you some lip service about how it is a non-punitive process and how we try to make it in to an educational experience, but that would not be the truth, at least not the whole truth. I can talk about fishbone diagrams, the 5 why’s, at risk versus reckless behavior, root-cause-analysis and a whole bunch of other terms that might lead you to believe our service has a great QA program.

I spoke to the training officer a few days after the call.

He started it off with “If I didn’t know you I would think you are the worst paramedic in the world.” Ouch.

He then proceeded to tell me how “the cops said they never want you to touch them.” The conversation turned to a discussion of my attitude and he concluded with telling me in a condescending tone “we are in the business of taking people to the hospital.”

I am okay with accepting responsibility for my poor performance on this call and I already felt like shit about it, but knowing people out there think I am a bad paramedic really bothered me.

When I got off the phone I was pissed off. All the talk of Just culture and a non-punitive environment at our service was just that, talk.

“The news spread rapidly. The case tried repeatedly before an incredulous jury of peers who returned a summary judgment of incompetence.” – Wu AW. BMJ. 2000;320:726-727.

I spent the next several days feeling like shit. I was withdrawn; I felt guilty, I felt like a fraud for all the times I have taught CEs and all the FTO instruction I have done. If I can’t get through an RSI what business do I have teaching people about them? I wondered if I was a bad paramedic. I wondered if my ego had gotten out of hand and had led to me hurt patients. My boss called me and asked me if I wanted to get a drink. I told him that I just wanted to be alone for a while.

I considered finding a new career path. I avoided my coworkers. I avoided a lot of people.

I had second-victim syndrome. Whoever is championing this cause I beg you to reconsider the name of this. I do not doubt the validity of the phenomenon but man, that name, ugh.

I have made some dumb mistakes in the past but this time was different. I don’t know why. I can’t put my finger on it, what exactly made me feel so bad about the call and the things I did. Maybe I deserved it, I don’t know.

My father used to tell me that “when you are in a black hole, everything looks black.” I was well past the event horizon and headed towards the singularity.

I don’t have PTSD, depression or substance abuse issues (unless we want to talk about caffeine) but I was fucked up over this call. I understand how if you were already suffering from mental health issues like PTSD that this could escalate things to full blown crisis mode. I’m talking the kind of crisis mode where you find yourself at the gun shop, taking inventory of your medicine cabinet or checking to see if your life insurance policy has a suicide clause in it.

As an aside I want to tell you I was going to try and eliminate the use of the F-bomb in my blog but I don’t think any other word in English captures the gestalt of where I was and how I felt at that time.

This is not to say you should not feel remorse when you make a mistake. I don’t want to go to the other extreme here where no one has any accountability for their mistakes and participation ribbons are given out to everyone, which is where we seem to be headed as a society. But if one bad call has you forgetting about the 10 years of good performance you have, if it has you feeling worthless as a person and you are considering a different career path, if you feel shameful at work, perhaps you have second victim syndrome (Jesus, I cringe every time I say it).

You get caught up in a positive feedback loop of negative feelings and self-doubt. You wake up one day and you simply do not want to go to work anymore. This is not the first time I have made a medical mistake; in fact the list of my mistakes is rather lengthy but this one really screwed me up.

Bolgia 9:
Slowly it dawned on me that I had done the same thing to the physician that night that the training officer had done to me.  In my mind he was a terrible doctor; incompetent, dangerous, arrogant and something needed to be done about him. In psychology the term “splitting” refers to the act thinking of people as all good or all bad. Someone who was once idealized makes a bad decision and now they are an idiot. Turns out I am a splitter.

The doctor fell in to the same cognitive traps that I did thinking the patient needed an airway before anything else could be done; thinking that an intubation was the only course of action and the benefits of getting the tube outweighed any costs incurred by the patient.

And while he may have gone a bit further down the path than I did I can’t fault him for it any more than I can fault myself.  It is a rough week having second victim syndrome (I just threw up in my mouth a little) and coming to terms with the realization you are an asshole.

We need to ensure that it is okay to make mistakes at work. This is not to say we simply shrug our shoulders and say oh well, mistakes happen, but it needs to be okay to make mistakes. They need to be investigated, they need to be talked about, the lessons learned need to be shared and the issues that led to the mistakes need to be addressed so that they are less likely to happen again. We owe it to our coworkers to do this in a manner that preserves their dignity and lets them know we understand and that we are there to support them.

In case you missed part I

View all posts by Brian Behn